Posted on June 25, 2013
This was posted more than 12 months ago. The information may be outdated. 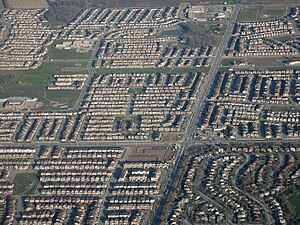 The Planning Committee meeting on June 25th saw the Cardinal Creek Village Concept Plan approved. Cardinal Creek Village is located on the outskirts of Orleans, just east of Trim Road. An area of approximately 208 hectares is intended to include 3,000 residential units, ranging from detached single family homes to townhouses and possibly low-rise apartments near the Ottawa River. Ecology Ottawa is pleased that the concept plan highlights features such as multi-use pathways, cycling connections, open spaces, and the provision to shop and work close to residential neighbourhoods. As stated in the staff report (Item 12),

“The design of the Cardinal Creek Village community is predicated on a walkable, transit supportive street network, an integrated open space linkage system, and a well-defined village core and mixed use areas at strategic locations to serve the community and beyond. Each distinctive and liveable neighbourhood will have a park, school or other amenities within walking distance. Well-designed streetscape and built form will be promoted in response to the location and intensity of the land uses.”

Nearby residents main concern with the proposal was the plan for a commercial ‘box store’ centre in the northernmost section of the development by Highway 174, which would block the view to the river and increase traffic along the highway. Residents are right to be concerned, and any new developments along the edge of the urban boundary must be highly serviced by public transportation in order to be sustainable. The Planning Committee attempted to address the concerns of residents, by getting Tamarack to publicly give its word that they were not creating a sprawling complex for box stores, but rather a village-style commercial centre.

It should be noted that this development is only possible due to an Ontario Municipal Board (OMB) decision made in September 2011 that designated certain lands as Urban Expansion Study Area, including lands in the east end of Orléans, known as Cardinal Creek Village. This basically allowed for Tamarack Homes to apply to expand the urban boundary by way of the creation and adoption of a concept plan. Ecology Ottawa does not approve of such expansions of the urban boundary as it is the antithesis of sensible urban design, and acknowledges that in this case the decision was taken out of the City’s hands by the OMB. As we attempt to deal with the effects of climate change, we must be protecting our natural environment, not increasing urban sprawl. We should be protecting our agricultural land as the need arises to re-localise much of our food production and we should be building a compact city that is sustained by world class public transportation. Even from a cost perspective, urban sprawl doesn’t make sense, as the cost of providing infrastructure and municipal services increases with the expansion of the urban boundary. In fact, city taxpayers who live in the Greenbelt often end up subsidizing the higher cost of providing city services to suburban dwellers. This has been detailed twice for the City of Ottawa by Hemson Consulting. The sensible solution is to grow inward and upward, using strategies such as intensification as well as densification, and not by building outward via suburban expansion.

The Concept Plan was ratified by City Council on July 17th.