The elephant in the room

Posted on June 26, 2013
This was posted more than 12 months ago. The information may be outdated. 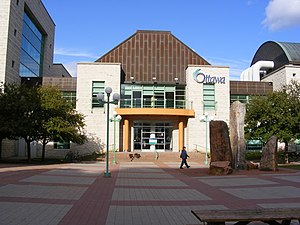 Intensification is a touchy subject. The packed room full of people at the Planning Committee meeting on June 25th can attest to that. Ecology Ottawa understands residents’ concerns with intensification and is happy that Councillors responded to their concerns with sincerity, as often developers seem to hold all the power. We would like to encourage our fellow residents of Ottawa to support appropriate and sustainable intensification in our neighbourhoods, as a compact and complete city will benefit us all. We also encourage developers to approach intensification in an appropriate way that respects the established communities and accommodates their concerns. Furthermore, we encourage our city councillors to continue to display leadership on this issue.

Intensification refers to the proportion of new dwellings that are built within the existing urban boundary area through infill, redevelopment, and building on brownfield or wasteground sites. Ecology Ottawa encourages sustainable intensification as it contributes to compact cities. There are many reasons for supporting compact cities. Firstly, compact cities allow for more sustainable modes of transportation. Higher population densities allow for the higher provision of public transit services as it is more feasible to operate these services when there is a high ridership levels. Also, because compact cities are high density and mixed use, people can live near to their workplace and leisure facilities, encouraging active transportation. Hence, the demand for private vehicular travel is reduced overall and people can walk and cycle easily to where they need to be. This is better for our health, and better for the environment, as less private vehicles on the road improves air quality and reduces greenhouse gas emissions. Secondly, in a compact city design, sprawl is reduced and land in the countryside is preserved. Thirdly, compact cities can be more economically viable than a sprawling city because infrastructure is provided cost-effectively per capita. The cost of providing municipal services such as garbage collection, snow-clearing and emergency services is reduced. Also, population densities are sufficient to support local services and businesses. Finally, there are positive social outcomes of a compact city as higher population densities can contribute to social cohesion, cultural development and greater diversity.

The City of Ottawa has certainly acknowledged the benefits of a compact city. Many of the preliminary policy proposals being discussed as part of the major review of our City’s Official Plan (which governs land use, transportation and infrastructure policies) are supportive of a compact city. Yet when Domicile Developments came before the Planning Committee with a proposal to build 50 stacked townhouses in the Chapel Hill neighbourhood of Orleans, a few Councillors were unsupportive. The change in zoning on the property at 5911 Meadowglen Drive and Orleans Boulevard (located in the south-west corner of the intersection) that would allow the development to go forth was recommended by city staff, who stated in their concluding remarks that “staff are satisfied that the proposed stacked dwelling use is compatible with the Official Plan's growth management strategy of intensification of development and is appropriate in the context of the existing low-rise residential built environment.” Residents felt that the two and a half storey development would not ‘fit the style’ of their single family dwelling neighbourhood and were concerned about increased traffic and noise. These are legitimate concerns and sustainable intensification requires that the City takes responsibility to ensure there are affordable and reliable public transit connections in all communities located in the urban boundary, particularly in areas they hope to intensify, to avoid added congestion. With this is mind, Ecology Ottawa supports city staff in their recommendation of this development and reiterates that this sort of development needs to be supported by sustainable transportation options. After the motion was split in two, voted upon, was defeated, reworded, and voted upon again, both Councillors and spectators appeared to be confused. Essentially, no decision was made and the item moved on to City Council* for judgement.

* City Council voted on this issue on July 17th. Again, there was much confusion surrounding the voting procedure. Thankfully, Council voted to approve the zoning change on the property in its entirety to allow for the stacked townhouses, as recommended by city staff. Ecology Ottawa awards Councillors Monette and Bloess a Thumbs Down for not supporting appropriate intensification in this instance. The remainder of the City Councillors receive a Thumbs Up for supporting this project.