Posted on July 18, 2013
This was posted more than 12 months ago. The information may be outdated. 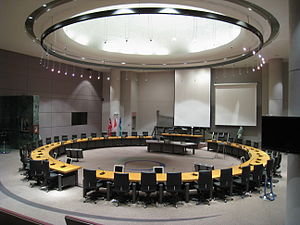 On July 10th, the Transportation Committee met at City Hall for a special meeting to discuss staff recommendations to approve that Richmond Underground corridor as the preferred corridor to extend Light Rail Transit (LRT) westerly from Bayview Station to Baseline Station. Despite concerns from the public and the National Capital Commission (NCC), staff recommendations were unanimously carried by the Committee, a decision that was ratified by City Council on July 17th.

As Committee Chair, Keith Egli, stated in his opening remarks, LRT will bring major change to the City of Ottawa, easing gridlock and making commutes comfortable and convenient. The new line is expected to move 10,700 people per hour in each direction, removing 1,500 buses that travel down the Sir John A. Macdonald Parkway per day.  Most of the concerns were regarding 500m of the 1.2km stretch along the parkway that would not be buried due to the City’s budget constraints. The NCC board voted to determine that there are two key conditions that will inform any decision to allow the project to move forward using the parkway lands; that there be unimpeded, continuous access to the corridor lands and the shore of the Ottawa River, and that the project has minimal visual impact on the corridor landscape quality and its experience by users. This means that the 500m from Dominion Station through Rochester Field that is to be built in a trench, not buried, is a serious problem for NCC approval. Some members of the public reiterated those concerns of the NCC and also added impacts upon the natural landscape, particularly the removal and replanting of trees, and noise and safety issues. However, staff and councillors are confident that this corridor is best in terms of the combination of affordability, ridership levels, and impact to the natural environment, to name a few of the criteria each corridor was assessed against.

Ecology Ottawa is very excited about the LRT extension and believes that creating a network of LRT across the City of Ottawa is crucial to create a more sustainable and liveable city. We hope that NCC demands will not prevent or delay this progressive western extension, as it is much needed. In fact, we would ask the NCC to recognize the fact that their four lane parkway is essentially the biggest existing barrier to people being able to easily access the river.  Four lanes of bumper to bumper traffic during rush hour and very little crosswalks and access points for pedestrians and cyclists are currently making the area inaccessible. Rather than point the finger at the City’s yet-to-be built light rail line, why is the NCC not working to install more crosswalks in the area? Ecology Ottawa would argue that the development of the LRT, along with the additional river access points that the City’s plan proposes, would be a vast improvement to the parkway, considering the NCC’s own conditions. As Councillor Chernushenko put it, we are not talking about a scenic drive route here. We are talking about a commuter route that receives 1,500 cars an hour at peak, not to mention the 1,500 buses carrying 8,700 people over the morning peak period. Traffic along the parkway should be significantly reduced with the introduction of LRT, particularly if two of the four lanes currently used by private vehicles are reconceptualized after the LRT is completed, such as returning the lanes to greenspace. However, this is a decision only the NCC can make. We agree with Councillor Chernushenko in his hopes that the corridor can be redefined with the introduction of LRT, not just cleared for more commuting cars. To sincerely improve physical and visual access to the river along the parkway, vehicle access should be limited to create a safer and more peaceful environment for visitors and residents alike to enjoy.