Posted by Ecology Ecology Ottawa on January 20, 2021
This was posted more than 12 months ago. The information may be outdated.

How many times have you walked through a park and searched in vain for a recycling bin? Or gasped in horror at the overflowing garbage bin, full of plastic bottles and other recyclable materials?

Anyone who has taken part in local park clean ups or in Ottawa's annual Cleaning Up the Capital program has seen the amount of waste, largely plastic, discarded and lying on the ground, stuck in tree branches flapping in the breeze, or floating down a stream. As plastic breaks down in soil or water, it doesn't decompose like other organic materials but, rather, it gradually disintegrates into microscopic pieces. What effects do these micro-plastics have on fish, turtles and other wildlife? Additionally, in a recently published article, it was discovered that plastic can pass through the human placenta. What effects do these plastics have on us?

To examine solutions to the problem of litter in parks, the City of Ottawa has been running a pilot recycling program in selected parks over the past several years. It started slowly in 2017 with just 7 parks, but because the recycling bins were placed at the edge of parking lots for easier collection, not where people needed them, they went largely underused. Of those that were used, most were contaminated by dog waste and other organics. 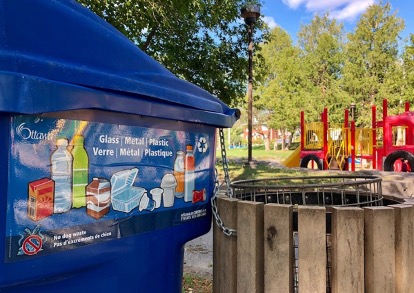 The following summer, recycling bins were co-located with every garbage bin in 49 parks, outfitted with signage depicting which materials could go in the recycling bin. This program, named the Parks Waste Diversion Pilot, was undertaken again in 2019 with the addition of green bins at ten parks to examine the feasibility of collecting dog waste and other organic materials.

During the November Standing Committee on Environmental Protection, Water and Waste Management meeting, city staff said that they "are planning to expand the recycling in parks program in 2021 to up to 20 parks and 1 destination [regional] park" (emphasis added). This appears to be a reduction of more than half of the 49 parks included in the 2018 and 2019 seasons. We are looking forward to receiving data from the City on the 2020 season. On the plus side, staff noted that long term planning includes money for the recycling in parks program.

As the City manages 4300 hectares of parkland at over 1300 sites, Ottawa has a long way to go.

But the City of Ottawa isn’t the only one responsible for waste within Ottawa’s parks. Federally, the National Capital Commission is responsible for large tracts of Ottawa's greenspace. As part of the NCC's efforts to reduce its carbon footprint, it has begun to make headway on waste diversion and green procurement. The NCC has succeeded in achieving a 78% landfill diversion rate along the Rideau Canal Skateway and has a plan to set up a waste diversion program for the greater Rideau Canal corridor. Their green procurement policy was adopted in 2012 but related guidelines have not yet been updated “to include lifecycle analysis and requirements to reduce carbon and plastic waste". Ideally, the NCC and the City of Ottawa would work in partnership to provide recycling services at all Ottawa's parks.

This bin at Riverview Park regularly fills with mostly
dog waste, an ideal candidate for a green bin.

On the provincial level, in an effort to move from a linear waste stream to a circular economy, and building on the 2002 “Packaging and Printed Paper Expanded Producer Responsibility” (PPP EPR) program in which industry and municipalities shared costs 50/50 [see Greenblue.org], the province of Ontario passed the Resource Recovery and the Circular Economy Act, 2016 (RRCEA). This requires producers to take 100% responsibility for their products and packaging throughout the lifecycle of their products. Tires and batteries were brought under this act on January 1, 2019 and July 1, 2020, respectively. IT and AV equipment are slated for January 2021, and lighting (including light bulbs) in January 2023. Packaging (blue bin) and paper (black bin) are expected to transition under the Act between January 2023 and January 2026. As noted by Samantha Edwards in her article about Toronto's waste system, "the idea is that if producers have to cover the full cost, they will be more likely to design products that are easily recyclable and made with less packaging." Of particular interest in this regulatory proposal is the expansion of the blue box services to include certain municipal parks and playgrounds in municipalities in Ontario.

What effect will these provincial blue bin regulations have on the City's recycling in parks program when blue bin materials become the responsibility of the producer rather than the municipality?

As part of Ottawa’s Solid Waste Master Plan (SWMP) revisions, the City plans to manage waste from a variety of sources, including parks and public spaces. With this City policy, provincial regulations making parks eligible sources of blue bin material, and the promise of money earmarked for recycling in parks contained in the City's long range financial plan, Ottawa may soon have recycling bins in all its parks. Implementation of recycling is challenging, both logistically and financially, but the opportunity to not only divert waste but to educate and engage the public on recycling in parks with better signage and appropriate, and accessible bins, is huge.

Further information about the recycling in parks program may soon be revealed when the SWMP is presented for discussion at an upcoming Environment Committee meeting in 2021. Residents will have an opportunity to comment on waste diversion in parks and public spaces and can advocate for a permanent year-round city-wide recycling in parks program through the SWMP update process.

In the meantime, is there a park near you that could use a recycling bin or maybe a receptacle for dog waste?Contact your councillor and let them know!

This article is part of the Council Watch series, a volunteer-driven program designed to inform Ottawa residents of environmentally significant decisions at City Hall. Council Watch consists in a systematic and strategic attendance of city council and committee meetings. Our goal is to keep you informed and, together, to hold municipal representatives accountable. The views expressed below belong to the author and are not necessarily those of Ecology Ottawa.

Ecology Ottawa acknowledges that our efforts to protect the environment take place on the traditional unceded, unsurrendered territory of the Algonquin Anishinaabe people. As an organization and as individuals dedicated to environment and justice, we are deeply grateful to Indigenous peoples for their ongoing stewardship of these lands since time immemorial. We recognize that we are on a journey of Truth and Reconciliation. We are committed to listening, learning and working to decolonize our efforts towards healthy and sustainable environments for all people.