Posted on July 6, 2013
This was posted more than 12 months ago. The information may be outdated. 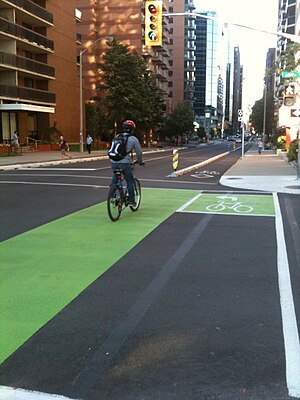 Councillors on the Transportation Committee discussed and ultimately passed a motion (ITEM 2) that would make the segregated bike lanes a permanent feature of LAURIER AVENUE WEST on July 5th, 2013.

There were many documented improvements in the area as a result of the segregated lanes’ trial period. City staff made a presentation which noted a huge increase (up 300-500%) in bike traffic on Laurier Avenue, a decrease in cycling-related collisions, and an increase in space between cyclists and motorists. The City’s study also revealed that the number of cars on Laurier Avenue West has decreased while the amount of car traffic on surrounding streets has remained unchanged. This observation suggests that more people are in fact choosing to bike to work. These conclusions lent credibility to the idea that implementing bike lanes does not lead to more congestion because more people opt to ride their bike.

The delegations were overwhelmingly positive and emphasized their feelings of safety and comfort as pedestrians and cyclists on Laurier Avenue West. A local business owner informed the Committee members that his business has increased as a result of the segregated bike lanes. After some logistical questions from Councillors to City staff, a vote was held and the motion was passed unanimously. Councillors on the Transportation Committee receive a Thumbs Up from Ecology Ottawa for passing this motion (Councillors S. Moffatt, R. Bloess, D. Chernushenko, M. Wilkinson, M. Fleury, P. Clark, K. Egli, T. Tierney, and A. Hubley).

Perhaps ongoing success of the bike lanes on Laurier Avenue West will prove to Councillors unsupportive of Complete Streets that a robust cycling network (including both on-street and off-street) in the city is preferable. Hopefully this will be one of many upcoming votes that will make Ottawa a leader in sustainable and active transportation. The item will be voted on at City Council on July 17.