Strengthen the future of the Byward Market, but make it a future with fewer cars

Posted on June 12, 2013
This was posted more than 12 months ago. The information may be outdated. 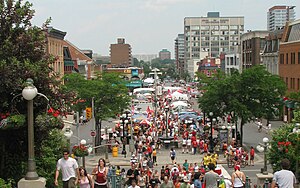 The highlight of the June 11th Planning Committee meeting was item 7 entitled ‘Strengthening the Future of the Byward Market’. As a response to concerns from the Byward community, the City of Ottawa hired a New York based firm, Project for Public Spaces (PPS), to identify the challenges and opportunities that exist in the Byward Market. The report that was submitted to the Committee concluded that ‘the public market (farmer’s market) located in the core of the ByWard Market is at risk of being lost if significant changes are not made.’

The Planning Committee unanimously agreed to spend a further $80, 000 over the next two years to undertake a more in-depth study of how the PPS report recommendations could be implemented. This will include creating a new governance model for the market and a plan to improve the streetscape. Ecology Ottawa is happy that amongst the short term recommendations were enhanced bike access and bike parking, and increased landscaping, trees and greenery. Other recommendations included transitioning the management to a non-profit corporation, identifying incentives to attract and support local fresh food vendors, exploring ways to increase security in the area, and improving seating along George Street. Long term recommendations were focused on creating more public space such as converting city owned pieces of land to create a central plaza. There was much discussion of rethinking York Street by converting the large parking lot down the centre to a public plaza or outdoor vending area, which would serve to make the Market a friendlier place for residents and tourists alike.

The discussion in the room focussed mostly on balancing the needs of residents with those of tourists, which appeared to hinge on two things; the type of products available at the public market and access to parking. The Ottawa Citizen’s City Hall Bureau dissects these issues in a three-part series of articles. Ecology Ottawa disagrees with the PPS report recommendation to create a parking validation system for public market shoppers that would subsidize or provide them with free parking. Similarly, Ecology Ottawa gives Councillor Bob Monette a Thumbs Down for his comment that people need to be able to drive to the market from Orleans and other suburbs, and thus there needs to be vehicle access and affordable parking to attract people. Whilst we want the market to be revived and to attract residents and tourists alike, providing free or cheap parking only creates an incentive to drive when the City of Ottawa should be encouraging active transportation and use of public transit services. The Market area is readily accessible by public transit from across Ottawa so there is no need for people from the suburbs to be driving in. As Councillor Blais pointed out, it is the City’s mandate to promote ‘smart growth’ which designates that people shop close to home, such as at their local farmer’s markets. The fresh, local food aspect of the market would best serve the local downtown communities that are within walking and cycling distance.

Hence, we await with anticipation the results of the next stage of the project*, which includes a plan to improve the streetscape. The Byward Market would be a more inviting and safe environment to residents and tourists if there were less cars on the road, more open public spaces, and more room for pedestrians to wander freely and enjoy the atmosphere. We hope the City remembers this as they move forward.

*The decision to further study the report recommendations was ratified by City Council on June 26th.