Posted by Ben Powless on November 16, 2013
This was posted more than 12 months ago. The information may be outdated. 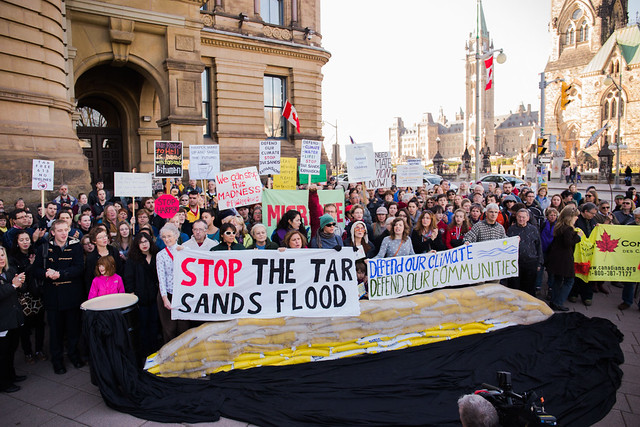 A flood of tar sands oil from the Prime Minister’s Office (PMO) was stopped today in Ottawa. Participating in a national #DefendOurClimate day of action, Ottawa residents helped to build a wall of sand bags to stop a symbolic oil spill outside the PMO. The event emphasized Prime Minister Harper’s role in reckless tar sands expansion and his failure to take action in the face of the climate crisis.

The Ottawa event, one of over 130 happening across the country, highlighted opposition to TransCanada’s proposed Energy East pipeline. This project would send 1.1 million barrels of oil per day through the region, including across the Rideau River, on the way to ports in Quebec and Saint John, New Brunswick. 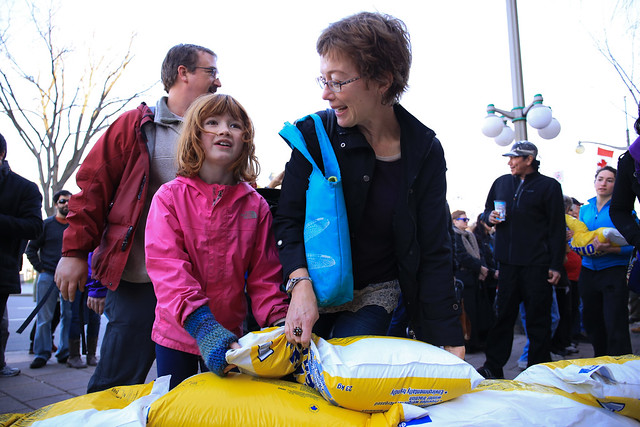 Gaye Taylor and daughter Rebecca help build a united wall of opposition to tar sands, and a wall to contain the Tar Sands the federal government wants to flood the country with.[/caption]

“The federal government has really been failing at defending our communities. In light of the proposed Energy East pipeline that would bring tar sands crude through Ottawa and allow runaway tar sands expansion and climate impacts, it’s up to all of us to stand up for our climate and our communities,” said Graham Saul, Executive Director of Ecology Ottawa.

The sandbag wall outside the Prime Minister’s office is also symbolic of what will be needed when rivers, such as the Rideau, flood from climate induced catastrophic storms. The event was organized by Ecology Ottawa, the Council of Canadians, 350.org Ottawa and the Ottawa Greenpeace chapter and included the participation of Ottawa residents from all walks of life.

“Typhoon Haiyan has reminded us all of the urgency to fight climate change. The debate is over – it is time to act swiftly and courageously,” says Muthanna Subbaiah with 350.org Ottawa. “We must ensure that the achievement of our time is defined by how rapidly and decisively the world came together to resolve the greatest crisis faced by humankind.”

Photos of the Ottawa event are available here and photos from actions from coast to coast will be available at www.defendourclimate.com as well as upon request. You can see Ecology Ottawa's photos on Facebook here. 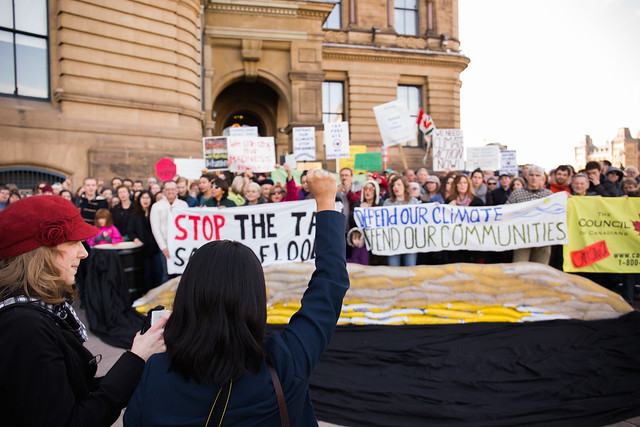 A representative of the Philippine Migrants Society of Canada talks about the importance of climate action and climate justice in light of the recent typhoon that devastated the Philippines, in front of the sandbags set up at Stephen Harper's Office in Ottawa to halt the tar sands flood and build a united wall of opposition to tar sands, tankers and pipelines.[/caption]